News from Alioscopy in Asia

The European Business Awards is an independent Awards programme, sponsored by RSM, set up to recognise and promote business excellence and best practice in the European business community. It is widely recognised as Europe’s largest and most significant cross-sector business competition and is supported by key business leaders, academics, media and politicians.

The guiding principles of the Awards are Innovation, Ethics and Success. Its core purpose is to support the development of a stronger and more successful business community throughout Europe.

The competition is free to enter and open to organisations of all sizes and from any industry sector. Over 32,000 businesses in 33 countries across Europe were competing.

RSM is the lead sponsor, and it has supported the Awards since their inception. RSM is the sixth largest audit, tax and consulting network worldwide. Other partners and sponsors include the UK Department for International Trade, Elite and PR Newswire.

The Worldwide Innovation Challenge was launched in December 2013 by François Hollande, president of the French Republic. It aims at promoting the development of leading companies driven by innovation and harboring a particularly strong potential in seven markets, viewed as strategically important for the French economy. 1200 projects were investigated, 300 were auditioned and 110 winners were selected. An award-winning ceremony was held at the Elysée Palace on July 23, 2014.

Alioscopy was awarded for its virtual reality device enabling a three-dimensional image to "levitate" between the machine and the user. The operator can manipulate this virtual clone, as if he were holding a real object. Among others, the aim is to provide surgeons with an innovative preoperative tools, displaying modeled representations of patient organs, segmented by French company Visible Patient.

This campaign was running on one of the new smart JCDecaux Transport ad space in Hong Kong MTR (Central). 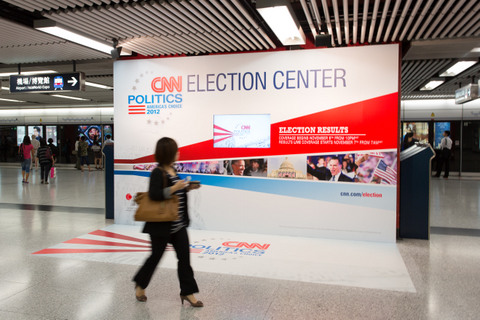 The  is one of the many brainchildren of MTR Advertising’s annual "Innovate" Festival that runs from September to November.

For the first time, JCDecaux Transport installs in the Hong Kong metro an Alioscopy 42" screen (Tsim Sha Tsui station) for a Tissot campaign, led by the agency Maxus.

The new smart ad space is one of the many brainchildren of MTR Advertising’s annual "Innovate" Festival that runs from September to November.

Targeting to promote Innovative Zones at high-traffic MTR stations including Causeway Bay, Central, Hong Kong, Tsim Sha Tsui, Mong Kok and Tseung Kwan O, the theme of the new campaigns are based on interactivity and engagement using the latest mobile and interactivity technology.