Alioscopy 3D displays can meet many external or internal communication and experiential marketing needs. This is especially true when the innovative impact of glasses-free 3D is a key value:

Like any other standard computer display, Alioscopy 3D displays can be controlled by means of various interactive or human–computer interaction devices:

In any case, designing a set for the display is usually a good idea:


Pepper's ghost is a theatrical illusion, named after John Henry Pepper, who first demonstrated this technique almost 150 years ago. It consists in placing à slanted semi-transparent mirror (generally at an angle of 45°) invisible to the audience. While it lets the background show through, this mirror also reflects another scene, this one hidden from the audience. When using an adequate play of lights, elements from the hidden scene can show or disappear, or even fully replace the main scene.

This illusion is still used today during scenic events or at Disney's "Haunted House" attraction. It usually requires using a standard 2D screen or a projector. The fact to see an image floating in a real environment gives a rather convincing illusion of volume, but what is actually seen remains a spaced-out, flat, 2D image.

In similar conditions, using Alioscopy 3D displays will make a truly volumetric reflection float in the scenery, offering the audience a staggering illusion. Anything black in the image becomes transparent. It is preferable to build the device in such way that the Alioscopy display and the reflective surface are coplanar, or else iridescence produced by polarisation of the LCD panel might appear. It is also possible to combine the reflection of several displays in a single mirror, in order to produce more elaborate illusions. 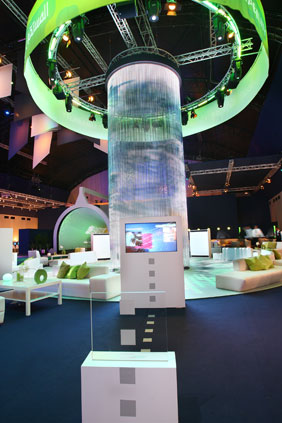 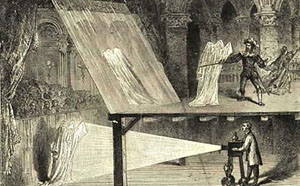